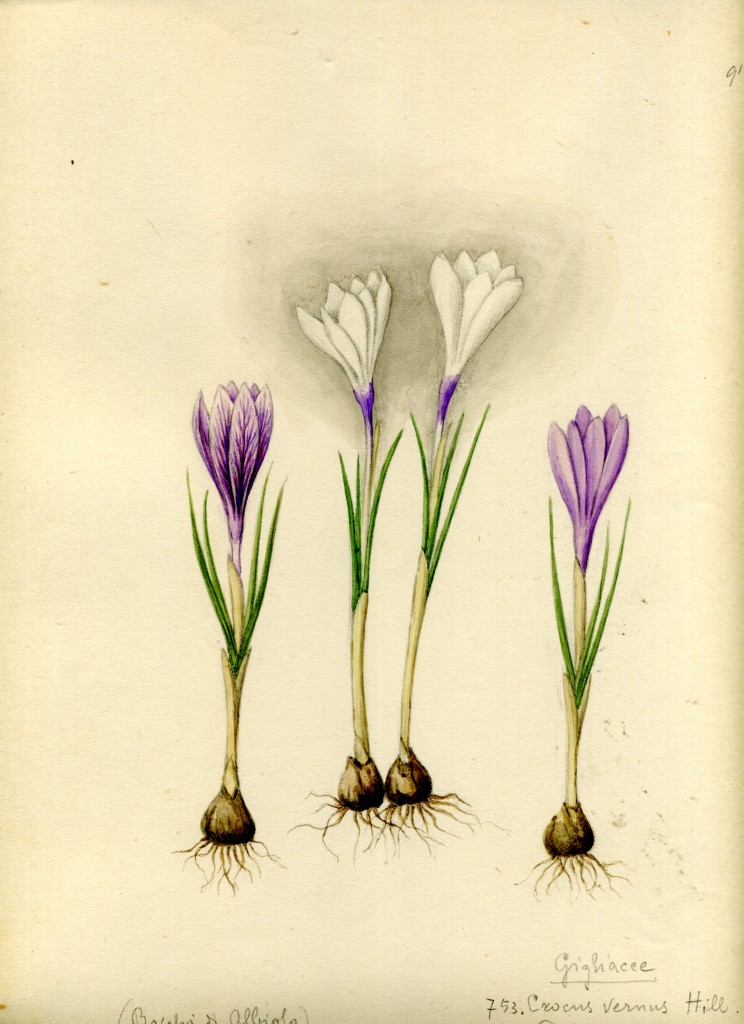 A PROJECT of HORTUS PICTUS Bergomensis – A COLLECTION

The Botanical Gardens are centers of knowledge committed to spreading knowledge and awareness to the role of plants on the planet and in everyday life. The plants are tools for education, research and, at the same time, organizations conducting their cycle in front of our eyes in their assigned place.

We have the responsibility to observe, participate of their existence, understand its biology, learn what indicate their growth and appreciate its beauty.

Among the most acute observers of the plants you certainly have the botanical painters: they have the patience to keep them in front of a one for a long time, they calculate the proportions, they learn the shapes and recreate faithfully.

If the executor is talented, the surprising result attracts and intrigues sometimes more than the living organism would. The strength of the visual language of color and forms often allows you to focus on details unnoticed, hidden or undervalued.

The Botanical Gardens are aware of this force so that their history is intertwined with that of botanical painting. They have made use of it, especially in the past, to show the plants and the parts of them that are not visible; Also the teachers have often resorted Hortus Pictus for their botanical explanations.

The Botanical Garden of Bergamo has on several occasions that drawn attention to the botanical painting by verifying the interest of the public and noting the relevance of the theme.

“The Brazilian Atlantic Forest”. The drawing as a means for the recognition of native flora (hall of the City Library A. Mai, 3 to 21 September 1999). This exhibition, with drawings of plants made by Margherita Leoni for their home areas, allowed to evoke the haunting beauty and richness of the Atlantic Forest, now reduced to 8% of the original surface.

“Orquídeas Brasileiras. Treasures of a forest to be saved “(Teatro Sociale, 26 June to 24 July 2001) is the next exhibition was aimed to draw an attention to the invaluable botanical heritage of the Brazilian forests. Margherita Leoni’s drawings have formed the iconographic carrier part. The exhibition was not only visited by over 26,069 people, but was also required by the Cantonal Museum of Natural History in Lugano and the Alpine Botanical Garden “Rea” in San Bernardino Trana (To).

“In the Kingdom of Plants – botany Contemporary Painting” (6 September to 3 November 2002), a show based on the works of 11 painters and two men that demonstrated the multiplicity of forms of botanical subjects in accordance with the natural rigorous. It is underlines the closeness of botanical painting and Botanical Gardens which were also been included in the catalog with the same title (ed. Servitium, still on the market) and whose graph repertoire is accompanied by several essays on the topic. The event was part of the celebrations of the thirtieth anniversary of the founding of the Botanical Garden.

The first approach, however, can be traced to 1996, the year which the first volume of the book “Our Plant – Plants Food Spontaneous” (ed. Junior) was edited, following was made a monographic exhibition to the Botanical Gardens (3 to 18 June 1995). In support of the texts on the species chosen, in fact, there was a request for a collaboration of the University of Turin, which, besides creating a specific test, allowed the reproduction of tables drawn dall’Iconographia Taurinensis, vast and precious heritage of botanical drawings commissioned dall’Orto local.

Another plot was the collaboration in the exhibition “Thirty studies of herbs and flowers” by Giacomo Manzu of GAMeC – Gallery of Modern Art and Contemporary Bergamo (17 December 2005 – March 6, 2006, then at the Art Museum of Clusone Time MAT (16 July to 10 September 2006). The exhibition was enriched by didactic apparatus, a reference herbarium studied ad hoc and a specific conference.

The functional link between the Botanical Gardens and the Botanical painters naturalists, once hired to reproduce the species in cultivation even when they were retired in the adverse season, it has come loose but never severed since it is the subject matter of representation and knowledge . Even today, for example, the Garden of Bergamo makes use of their contribution to illustrate with grace and precision specimens, for information appliances handled by other bodies, such as the brochure for the Orobie Park in 2005 and for the 10 panels constituting the botanical itinerary – the natural Peaks Belloro made for the City of Premolo in 2007.

A fundamental step in this journey is the donation in 2006 of the collection “Wild Flora” made by Riccardo Rigamonti, by Matilda his daughter who constitute the nucleus of the Hortus Pictus Bergomensis, collecting key asset but also a long-term project that aims to strengthen the historical link between design and botanical Gardens, as well as the conservation of paintings considered significant in this regard.

It is a good wish that the project is born from a collection of drawings that the author has devoted to the natural flora and especially to species that are common that anyone can easily meet. Their pictorial dignity recognized by Riccardo Rigamonti, underlines its intrinsic beauty and, at the same time, allows you to understand the botanical sense, particularly strong same species.

The Hortus Pictus Bergomensis project is actively supported by GAMeC – of Modern and Contemporary Art Gallery that made avaiable the store of the Botanical Garden works in its warehouses, according to the standard of optimal quality.