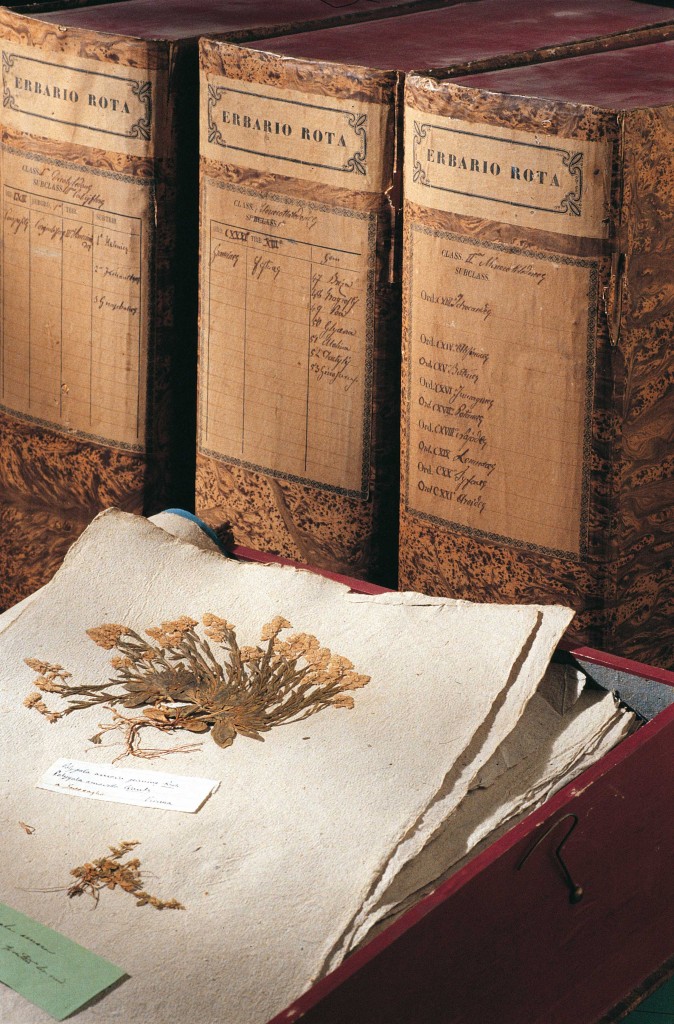 The Botanical Garden of Bergamo has a large collection of historical herbaria (about a dozen, for over 50,000 samples), among which is of considerable a valor to doctor and naturalist Lorenzo Rota from Bergamo, which is dedicated to the Garden itself.

The Herbarium of Lorenzo Rota was bought in 1875 by the City of Bergamo, who then donated it to the Museum of Natural Sciences “E. Caffi “. It is a collection of vascular plants classified and collected in 43 folders, including over 10,000 specimens of 156 families and 939 genera. The collection includes also 31 folders cryptogam classified, 12 packs of mosses and mushrooms and 3 packs of duplicate seagrass.

Next to the samples collected from the same Rota, exsiccata appear coming from the herbaria of other scholars with whom the Rota was in contact. Currently the herbarium is stored in the halls of the Botanical Garden and was the subject of cataloging and photographing according to regional standards of SIRBeC (Information System for Cultural Heritage of the Lombardy Region) campaigns.

The HERBARIUM of Lorenzo Rota of vascular plants 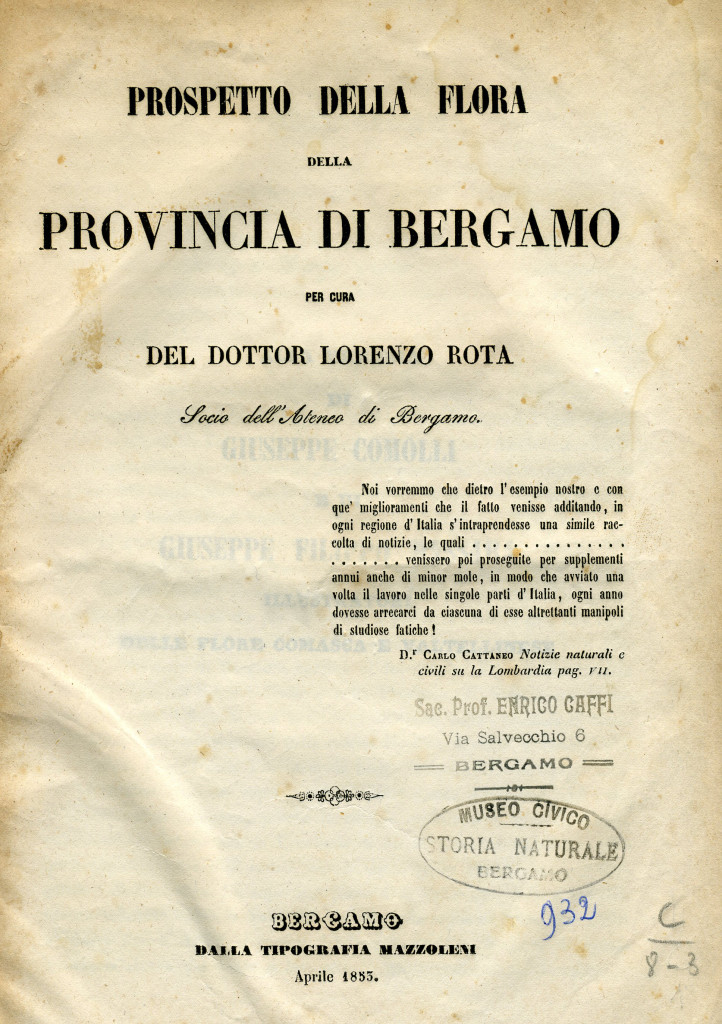 The Herbarium of Lorenzo Rota (Carenno 1818 – Bergamo 1855) is dedicated to vascular plants. It consists of 10,650 sheets, many of them with more specimens, preserved in 47 binders with sorting and original arrangement.

All those who have dealt recently or in the past with the local wild flora studies have referred to the documentary traces of Rota, both in publications, among which the Prospectus of the flora of the province of Bergamo (1853), both of herbarium. This is tangible proof of the presence of a given species in our province.
For the compilation of the prospectus is needed by the author, first the verification of existing data, then the preparation of a reference collection composed of samples collected during the floristic explorations and exchanges with other botanical.

1,323 sheets derived from these exchanges and are attributable to a hundred correspondents, by Agostino Todaro, prefect of the Botanical Garden of Palermo, Louis Francois Jules Rodolphe Leresche active in Lausanne (CH), by Jean Matie Delalande from Nice, Vincenzo Cesati, prefect of the Botanical Garden of Naples, Luigi Rabenhorst, philosopher, pharmacist and crittogrammista German, Austrian CG Brugger.

The HERBARIUM of Lorenzo Rota of cryptogamic plants

A suspended project of Lorenzo Rota (due to his sudden death when he was only 37 years old) is the study of the cryptogamic flora, i.e. mosses and liverworts of the Bergamo.

In addition, in this case, for the preparation of a full-bodied herbarium it was provided with samples collected by him, both corresponding with botanical knowledge of the subject.

These include Luigi Rabenhorst (1806-1881), philosopher, pharmacist and cryptogamic active in Germany. For this purpose, it was certainly endowed with bibliography and instrumentation, no doubt a microscope.

During the work, many difficulties arrived from this study discipline point of view, considered secondary to what is dedicated to vascular plants and that the vastness was never faced before in our area. Emilio Rodegher (1856-1922) who published in 1893 a list of the Marchantiophyta of the Province of Bergamo, and Valerio Giacomini (1914-1981), one of the greatest botanical Italians in the twentieth century consulted this herbarium.

The cryptogamic flora is still waiting to be studied; this herbarium is an important reference point for those who want to approach the subject. 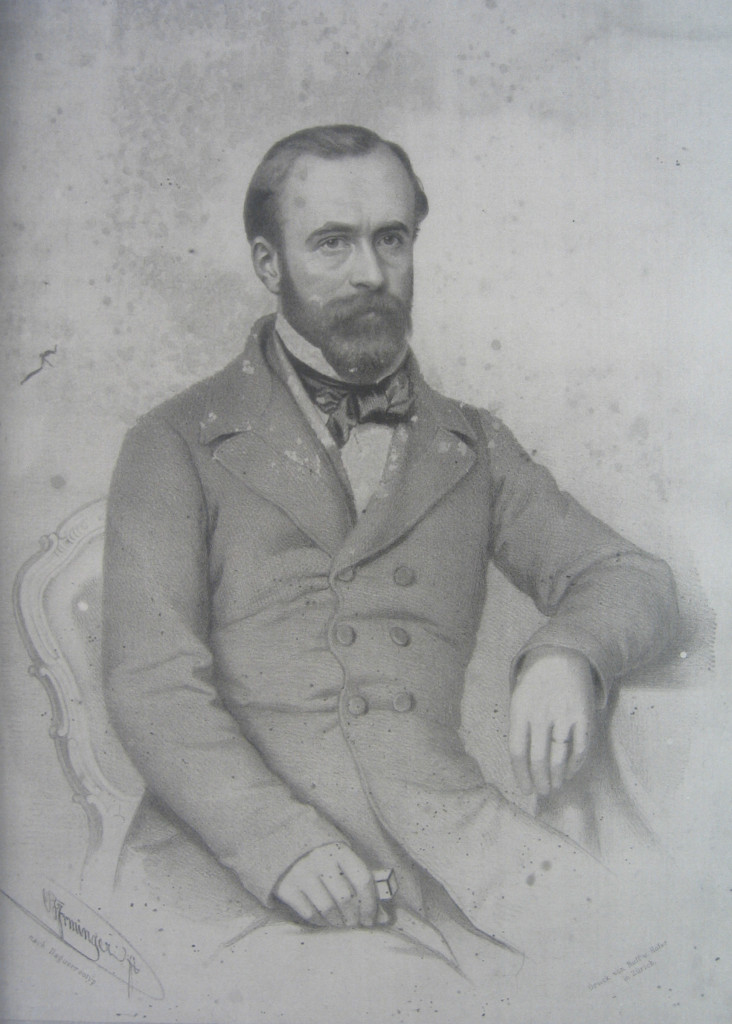 BIOGRAPHY: Lorenzo Rota was born in Carenno in 1818 and studied medicine at Pavia, showing as well a keen interest in botany, so lots of his time was spent as a Botany assistant at Pavia. He practiced as a doctor prior to Adrara, then at Bergamo. In 1842 he published a catalog of the flora of the province of Pavia, and in 1853 he edited his “Statement of the flora of the province of Bergamo”, in which he listed 2,157 species and 263 taxa lower seagrass. Later, he studied also cryptogams (liverworts and mosses). He died in Bergamo at the age of only 37, in 1855, during a cholera epidemic.