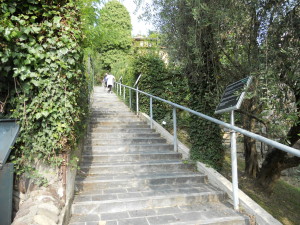 The more than 18,000 annual visitors who climb the stairs of Colle Aperto to reach the Botanical Garden, can start the tour right from the first step. Here is placed the first of the 10 visual tactile posters devoted to the evolution of plants, an exhibition characterized by an approach suitable for all visual and tactile, also blind and visually impaired, made with embossed designs and texts translated into Braille, as well as to a foreign audience, written in English. The theme of evolution is starting from the Big Bang Theory (bottom), and then to (above) the apex of the evolution of plants in correspondence with the first collections of the Botanical Garden already visible.

Since the formation of the solar system, 4.57 billion years ago, the path commemorates the appearance in the oceans of the first single-celled organisms, first those with no nucleus (bacteria), and then those nucleated, algae, from which until differentiated Marchantiophyta conquest the mainland, followed by the ancestors of the current club mosses and ferns, gymnosperms and angiosperms up to. The plants have a long story to tell, as they contributed significantly to make the Earth a living here too: they changed the unlivable primordial Earth’s atmosphere, they have changed the climate and led to the formation of soil.

The realization, supported by Lombardy Region and Fondazione Cariplo as part of the EST Project – “Educating to Science and Technology”, have collaborated with the branch of Bergamo Italian Union of the Blind and Visually Impaired, Stephen Schultka of the Natural History Museum in Berlin and Francesco Bracco, the University of Pavia. Below are the contents of the 10 stages of the route of the evolutionary plant scale.